Being a trucker means driving huge distances on demanding deadlines. And one of the biggest dangers in trucking is the threat of drivers falling asleep at the wheel. To celebrate 60 years of truck production in Brazil, Ford decided to try to help the problem by creating a hat that tracks head movements and alerts drivers in danger of snoozing.

“SafeCap, which began as a local market project, continues to grow as we see potential around the world,” says Oswaldo Ramos, Ford’s head of sales, marketing and service in Brazil. “After we conclude our Brazilian tests, the goal is to share with other countries.”

But the project is far from finished. The company is hoping that by talking about SafeCap, they’ll be able to find more innovative partners to refine the product.

The SafeCap tracks head movements to warn when they're dozing off at the wheel.

Truck driving is an exhausting job that requires constant attention to the road. Falling asleep during long stretches is an occasional -- and sometimes lethal -- concern. That's why Ford helped develop the SafeCap, a hat that senses head movements associated with sleepiness and wakes the driver up with sound, light and vibration.

To help celebrate 60 years of producing trucks in Brazil, Ford partnered with theSao Paulo-based creative agency GTB to make the cap. They researched and mapped head motions, differentiating those made while driving (checking the instrument panel, looking in mirrors) from those made while getting drowsy. The hat has an inboard accelerometer and gyroscope that measure head movements throughout the drive along with components that vibrate, make sound light up. Agency employees explain the design in the video below (in Portuguese): 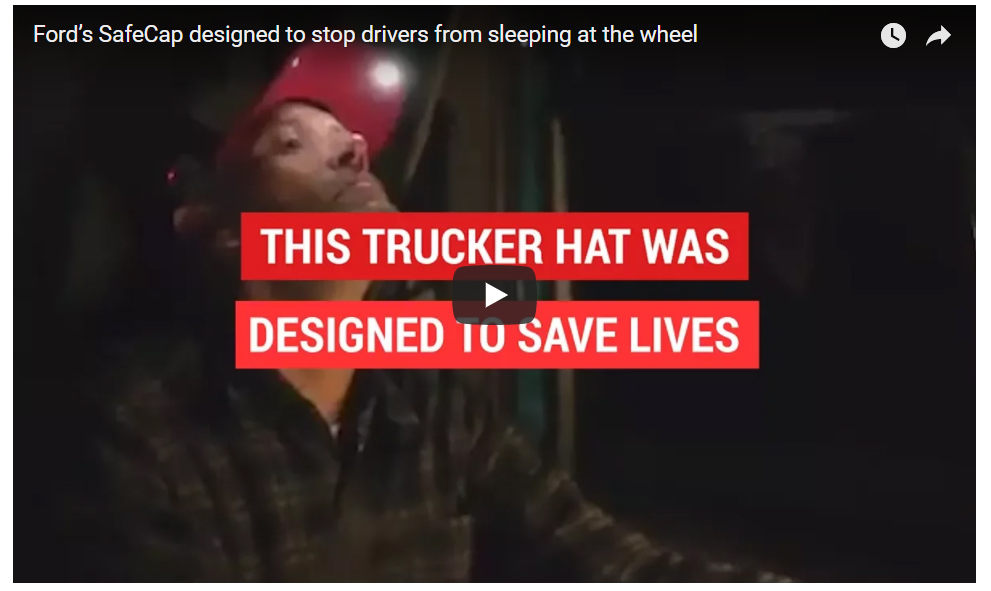 Obviously, the SafeCap is a nice brand promotion to show Ford as company that cares (well, enough to make a prototype). But as Fast Company points out, the automaker introduced a baby-rocking car seat concept earlier this year in Spain which got enough hype that Ford made it an option for car buyers. There's no word on when (or if) the SafeCap would be mass-produced, but Ford's head of sales in Brazil said their "goal is to share with other countries" after tests.